Memorial Day comes and goes every year, and on this day we recommend a book that will, in the only way possible, show us what sacrifices are made for us by our military. It will remind us that while we may or may not agree with the battles fought, the men and women who did the fighting deserve our recognition, honor, and help when they return—well, if they return.

If you’ve ever wanted to know what it’s like to be under fire, there is no better book to read than Sebastian Junger’s War. Covering the fifteen months the author was embedded with a cameraman in a platoon based at Restrepo, a remote outpost in eastern Afghanistan, War conveys the fear, the adrenaline, the camaraderie, and the sorrows of men surround by the enemy for months at a time.

Junger writes early on of his objective: to try and convey what war really feels like. Few of us, thankfully, will ever experience what these men went through. We learn about the backgrounds of each of the members of the platoon, why they enlisted, what their training was like, and how they got to Restrepo. He writes movingly about the deep trust each man has in each other. While sometimes they don’t get along, there is a deep love between them and understanding that all of them will perform at their very best, because anything less puts others at risk.

Junger writes with a stark, clean voice which can both analyze and experience events which are almost impossible to contextualize for a citizen’s perspective. While chronicling the bravery of these men, he is also able to articulate his own fears in a clear manner which shows both a sense of wonder and the commitment to continue his work. Tellingly, he writes articulately about his decision to not be armed in a war zone, and talks about what he would do if he had no choice but to arm himself. He also writes, agonized, about how you feel when you lose a member of a fighting team.

*Note: the documentary, Restrepo, which won the Grand Jury Award at Cannes, was written and directed by Junger and his cameraman, Tim Hetherington. In 2011, Hetherington died in a mortar blast covering the Libyan Civil War. Restrepo was also nominated for “Academy Award Best Documentary – Feature” at the 83rd Academy Awards.

Check the PPLC Catalog for War. 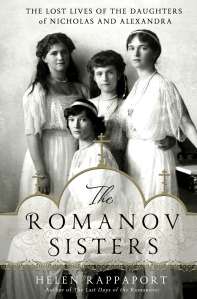 Everything I ever learned about the Romanovs came from that terrible animated movie in the nineties, Anastasia. To my surprise there were no talking bats in the real story. Rappaport does an amazing job defining each individual girl and even their reclusive mother through their personal letters and diaries. They weren’t just victims of assassination, they were war time volunteers, charming and playing, international celebrities, and extremely loyal and loving. The family banded together to care for their ailing mother and hemophiliac youngest brother often spending long periods of time inside their grounds and rarely attending social engagements. This separation from their people and society bred rumors and it was apparent that the public despised the Tsarina. The girls, however, were adored or at least as much as they could be by a country on the brink of revolution.

I recommend this title to history buffs or to those who love a good gossip magazine. It certainly didn’t read like any history book I’ve read before, and I’m definitely walking away with some cool information. Also, Rasputin is like the weirdest/most interesting person and definitely an important part of the Romanov story.

Check the PPLC Catalog for The Romanov Sisters.

This movie is a dramatized version of the search for and execution of Osama bin Ladin, the man who, among other atrocities, claimed ultimate responsibility for the September 11, 2001 attacks on the World Trade Center in New York City, New York. The movie garnered a host of Academy Award nominations for Best Picture and Best Original Screenplay, and won the Academy Award for Best Sound Editing.

Although the real-life manhunt for Osama bin Ladin involved hundreds of intelligence personnel, the movie version pares this down to a single CIA operative named Maya (Jessica Chastain). Maya has spent her entire brief career searching for Osama bin Ladin, and, as the movie opens, she is living in Pakistan where she accompanies a fellow operative during regular interrogations of a detainee with suspected ties to 9/11 hijackers. These interrogations involve waterboarding and sleep deprivation among other brutal techniques, but eventually the detainee reveals vital information that will lead the U.S. military directly to bin Ladin’s doorstep.

I found this movie to be very compelling and engaging, and it made me think about how much manpower, skill, and intelligence went into tracking down a single, albeit very elusive man.

** This suggestion was posted during Banned Books Week 2015 ** 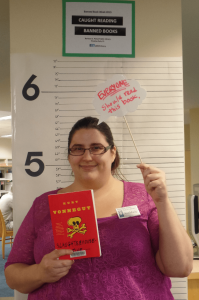 It’s easy to understand why parents might not want their teens reading Kurt Vonnegut’s classic novel, Slaughterhouse-Five: it’s full of obscenities, sex, and blasphemous statements. But when you consider that the book’s alternative title is The Children’s Crusade, the whole argument against teens reading it begins to break down.

Vonnegut was only 23 when he was captured and held as a prisoner of war by the Germans during World War II. His captors took him to Dresden, Germany where he witnessed the war’s most controversial Allied attack: a beautiful city full of artistic marvels and innocent civilians was razed in multiple bombings over a two-day period. After the war, the Dresden bombings lapsed into relative obscurity. Vonnegut had a hard time getting official details about what exactly happened there. All he had were his own terrible memories.

The most powerful message of Slaughterhouse-Five is its anti-war stance: nothing about war (and there’s a lot of war) in this book is portrayed in a virtuous light. But it’s laid out in the first chapter that writing an anti-war book is a futile effort; wars are “as easy to stop as glaciers.” So why would Vonnegut spend twenty agonizing years reliving his wartime experiences just to write a futile book? You could argue that the famously fatalistic Vonnegut wrote it because he had to. But a better argument, and a more hopeful argument, is that he didn’t actually think it was futile at all.

END_OF_DOCUMENT_TOKEN_TO_BE_REPLACED

It’s 1962, but the world is very different from the 1962 in our history books. The country formerly known as the United States is now split between the Japanese Pacific States on the west, and the Great Nazi Reich on the east. What few Jews survive live under assumed names, and slavery is legal once again. This is because the Axis Powers defeated the Allied Powers in World War II, transforming Germany and Japan into the world’s superpowers.

The novel follows several characters whose lives intersect in different ways. But rather than having a central story line that concerns one or two main characters, Dick weaves the characters’ many story threads and a few reoccurring themes into an intricate tapestry that has something interesting to say about the nature of reality.

END_OF_DOCUMENT_TOKEN_TO_BE_REPLACED

If you missed out on the phenomena that is Band of Brothers back in 2001 when it as originally released, then you should wait no longer. Band of Brothers is an epic ten part miniseries based on a book by Stephen Ambrose about World War II that focuses on the real men of “Easy Company”, an infantry regiment assigned to the 101st Airborne Division that landed in Normandy on D-Day. Partially written and directed by Tom Hanks, Band of Brothers is said to be one of the most accurate portrayals of the war ever produced.  The writers conducted interviews with veterans and had every episode scanned for authenticity and accuracy by these men before the series aired.

Each hour-long episode focuses on Easy Company’s struggles through training, battle, and emotional dilemmas—often showcasing each man’s particular traits and deeds. Your respect for these men will continue to grow as you see how they deal with the loss of their comrades, shell shocked soldiers, and life-threatening situations. Lieutenant Richard Winters, often a plot center point, learns to embrace his leadership role as he climbs the military ladder to Major. He leads the men mostly successfully through numerous battles: D-Day, the Battle of the Bulge, and Bastogne.  Interspersed throughout the series is footage from interviews with the men of Easy Company in 2001; they give firsthand accounts on what they were thinking and feeling.

END_OF_DOCUMENT_TOKEN_TO_BE_REPLACED

At the end of World War II, things looked grim for the Japanese forces. With the Allied Powers closing in on the Pacific island of New Britain, Commanders are rallying their troops for a final push against the enemy. Unfortunately, their rallying cry is for a suicide rush. The Commanders have no expectation that any solider will survive. They console their men with the fact that they will be dying noble deaths for the glory of their country.

There is no one main character in this story. Instead, there are many different characters, but they are largely interchangeable. However, the characters are less important than the journey they go on, and how each character dies. This graphic novel hammers home the futility of war and violence, with an off-beat comedic/melancholy tone. The story has been described as “90% fact” by its author, and is based on his actual wartime experiences.

END_OF_DOCUMENT_TOKEN_TO_BE_REPLACED

Books in the Park
Blog at WordPress.com.