In honor of Talk

Like a Pirate Day, we’re continuing our reviews of the Princeless series! Raven’s journey continues. She now has a full crew of pirate women and has taken command of a ship. The crew sets sail to confront Raven’s brothers who have excluded her from her family’s pirate legacy.

The first volume focused mainly on the journey to finding said crew and ship, and volume two explores the characters and their back stories. It also delves into the democracy aboard the ship, which is something that most people don’t think of with pirates. Raven, a stern pirate thanks to her upbringing, is willing to be more flexible to work with her crew and manages them in a way that is kind and fair and gives everyone on board a voice.

As with the first volume, the art is gorgeous! The entire series uses bright colors that truly pop – there are lots of reds, blues, and golds and everything just feels vivid. The costumes that each of the pirates wear are very unique and distinguishable. Even in zoomed out panels you can tell who is who.

This volume also gives us a chance to see the crew in true life or death action. Raven’s brothers have sent a crew after her and her mates to take them captive and the ladies must find a way to foil their plan by working together.

Now, mateys, I challenge ye to go and find yerself a copy of this here graphic novel! It’ll leave ye wantin’ to find yer own crewe of pirate lasses to set sail with! 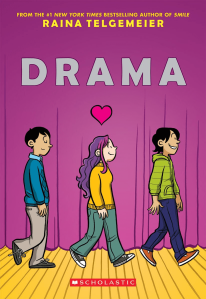 Drama is a middle grades graphic novel and a quick read, even for a reluctant reader! The illustrations are charming and colorful and the characters all have distinctly different designs, including the identical twins in the story.

The story stars Callie, a 7th grader at Eucalyptus Middle School, and a member of the theater stage crew. She has a passion for set design and no ambitions to actually perform the musicals that she loves so dearly.

Drama doesn’t just allude to the production being staged in the story, but to the actual drama of middle school life. Callie has a crush on Greg, her friend’s brother, but he’s dating someone else, and so on and so forth – Anyone who has ever been a middle school student will find it easy to relate to. Callie must balance her friendships and relationships with the upcoming production and the rapidly approaching deadlines that come with it.

Telgemeier tells a story that isn’t outlandish or unreal – it’s easy to imagine this happening at one’s own middle or high school. The characters all feel real and fleshed out and it’s easy to read their tone and personality through how they are drawn.

I would definitely recommend Drama to any middle or high school readers or any young adults looking for a trip down memory lane.

Check the PPLC catalog for Drama, by Raina Telgemeier.

The Baby-Sitters Club #1 – Kristy’s Great Idea by Raina Telgemeier (Based on the novel by Ann M. Martin)

The Baby-Sitters Club has been revamped! The classic series has been re-imagined by Raina Telgemeier for a new audience. Kristy’s Great Idea takes the same story from the original Baby-Sitters Club book that many parents will remember and retells it as a graphic novel, or a very long comic book.

The story is about a group of girls who make spare money babysitting neighborhood kids and, in some cases, their own siblings. Kristy, the eventual leader of the club, has the idea to work with her friends so that parents can call one phone number to schedule babysitting and not have to call each of them to see who may be available. The book also introduces the girls’ family situations; Kristy is growing up with her mom and brothers after her parents’ divorce, Mary Anne’s mom died when she was a baby, and Claudia’s creativity goes against everything her parents want for her in life.

I read the original Baby-Sitters Club Books growing up and recommend these for upper elementary and middle school aged readers.

Check the PPLC catalog for The Baby-Sitters Club.

“Maggie likes being a kitty. But sometimes that’s not enough. Sometimes a girl has to be SUPER.” This description from the book flap perfectly captures the imaginative and fun tone of this story. Armed with a creative mind and a dress up box, there are no limits to young Maggie’s play. In the span of a few pages she’s a kitty who meows and eats under the table, a Super Kitty who opens jars for everybody, a Princess Super Kitty with lots of jewels, and a Water Lily Hula Porpoise Princess Super Kitty ready for bath time. This little girl really can do anything!

I would recommend Princess Super Kitty, by Antoinette Portis, to children ages 2-5. The vocabulary is simple, yet engaging, and a fun way to get inspired to play make believe!

Swatch: The Girl Who Loved Color, by Julia Denos

Swatch: The Girl Who Loved Color, by Julia Denos, is a beautifully illustrated picture book with a story of wildness turned to kindness. Swatch loves colors and colors love Swatch. The colors even listen to her and come when she calls them. Swatch is wild and loves to tame the colors.
Moving on from just taming them, Swatch decides to collect the colors in jars. She likes to find rare colors, shades of colors that you might only see in one place in the world. In Between Gray, for example, is found only on her kitten’s leg. Swatch scoops them up in the jars, pokes holes in the lid, and then keeps them in her room. There is one color that has eluded her, though – Yellowest Yellow. When Swatch finally finds Yellowest Yellow, she finds that not all colors want to be tamed.

The art in Swatch is whimsical and bright. The characters, mischievous. It feels like a colorful take on Where the Wild Things Are. I would recommend Swatch to all young artists in preschool through elementary and their parents. 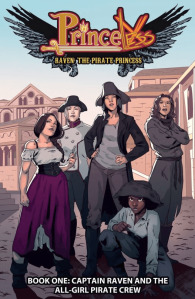 Take one pirate princess without a crew or a ship, add a heaping scoop of determination, and round it off with a band of misfits that come together under her colors and you have Raven Pirate Princess: Captain Raven and the All-Girl Pirate Crew, by Jeremy Whitley and illustrated by Rosy Higgins and Ted Brandt. I expected action and adventure, but what kept me hooked was the witty humor and lovable characters.

Having previously been abandoned to a tower by herself to wait for her prince, Raven now faces an onslaught of the stereotypical male pirates as she begins her search for a crew. She hears everything from “not all men,” to “Help! I’m being oppressed by the matriarchy!” as she turns down man after man for the job. The crew comes together from women around town who are looking for new adventures. They’ve slayed the Goblin Kings in their table top games, now it’s time to band together and go search for real danger. Led by the new first mate, Katie (a.k.a. Muscles), a diverse crew of women rallies behind Raven to set out to reclaim her rightful place as the head of her family’s pirate enterprise.

The art in Raven Pirate Princess: Captain Raven and the All-Girl Pirate Crew was stunning – the scenes are all well drawn and dynamic and the story flowed easily from one panel to the next. Beyond the writing and artistic skill used to portray the women, I truly appreciated the diversity that is included among the crew. Yes, it is an all women crew, but you will not confuse one woman for another. They each have their own unique looks, backgrounds, interests, and dialogue style. Any Pirate Princess can pick up this graphic novel and see herself in its pages. This graphic novel is recommended for ages 9+ and is a quick, fun read for any girl (or their mom!) that’s ever dreamed of the sailing the seven seas. 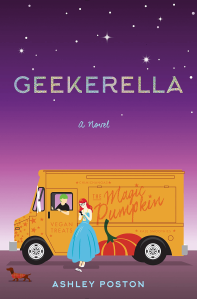 This is a modern day retelling of – you guessed it – Cinderella. The classic fairytale about an orphaned girl who is left with her Wicked Stepmother and stepsisters after the death of her father. The stepsisters relentlessly taunt her and make her life difficult, while the stepmother treats her as a servant instead of as a daughter.

Geekerella is no different, except that in modern day Charleston there are no princes to woo. Danielle – Elle, for short – has grown up as a megafan of the series Starfield and the announcement has just been made that a reboot is coming. Normally, this wouldn’t involve anyone from her family, as they all look down on her “fandom,” however, it is revealed that teen heartthrob Darien Freeman will be playing the lead role. Elle’s Darien obsessed step-sisters decide to enter the cosplay contest that has been announced for a chance to win a meet-and-greet with the actor, as well as a trip to the premiere of Starfield in Los Angeles.

On the other side of the story, Prince Carmindor himself, Darrien, finds himself as young Hollywood royalty but lacks the normal life of an eighteen year old that he longs for. He doesn’t want to attend the convention as a celebrity, missing the days when he was able to go as a fan. He’s talented, good looking, and rich, but he is terribly lonely.

Meanwhile, Elle gets a text from a Prince Carmindor cosplayer who would like to cancel his appearance at Excelsicon, the convention where the contest will be held. Elle and the stranger text daily. It is clear that they are both true fans of the show and this is the first time since her father’s death that she’s been able to connect with someone over it the series. Elle decides to enter the contest as well, figuring that she can make a run for it and stay in L.A. if she wins and finally be rid of her stepfamily. With the help of a fairy co-worker named Sage and the Magic Pumpkin (a vegan food truck), Elle is Atlanta-bound for the convention and hopes to meet her Prince Carmindor in person.

The story is derivative and predictable, but that doesn’t make it any less fun. It was a quick and satisfying read that left me with a smile on my face, as most happy endings do.

Check the PPLC Catalog for Geekerella, by Ashley Poston.

Books in the Park
Blog at WordPress.com.